We’re meant to be a full quintet
But two of us aren’t ready
And so we sing a trio
A bit like Ed, Edd n Eddy

Hopefully the other two
Will finally awaken
And then we five can give full voice
When Dad brings home the bacon.

This was written in response to Kreative Kue 255 published on this site.

Kreative Kue 224 asked for submissions based on this photograph:

“Lets hope he has not made a mistake.”

“A mistake? The guy is clearly off his rocker.”

“Um. Let’s look at the evidence. One he is sitting out in the hot sun. Two he thinks beer is going to drop from that dark cloud.”

“But as he explained he created a new form of rain.”

“Rain that is supposed to be beer? Don’t make me laugh.”

“I tend to feel sorry for him.”

“Not sure that is the proper emothion. I think more we should get him some help.”

“What would happen if that cloud opened up and filled his glass with beer?”

“He would be a billionaire in no time. That’s not going to happen. Who ever heard of such a thing.”

“Normally when it thunders I smell ozone. Right now I smell beer.”

“Don’t make me put you in the same straight jacket.”

“Look. It is raining in the glass and there is a nice head on the beer.”

“I see it alright. I am really surprised.”

“What do you say now Mr. Doubting Thomas?”

Okay, let me try to explain it again.

The angle on top of the post is carefully calculated to be twenty-three point four degrees – exactly matching the planet’s axial tilt.

I’m coming to that; the coefficient of friction between the glass and the post’s surface is precisely two per cent more than is necessary to resist the pull of gravity when the glass is empty.

I’m glad you asked that. The angle of the handle is important, as it has an effect on the overall c of g of the glass.

C of g means centre of gravity. I’m just trying to save saying the same thing too often.

Okay, if you prefer. The angle of the handle is important, as it has an effect on the overall centre of gravity of the glass. Better?

Now. Here’s the fascinating part. Every time a fighter jet passes over; which, incidentally, they’re not supposed to do as this is a designated no-fly zone, although these Top-Gun types seem to live as though the normal rules don’t apply to them; but when one does pass over, it sets up a sympathetic vibration.

No, I don’t know why it’s called sympathetic, and I have no idea what it’s actually sympathetic to; not me, that’s for sure. That vibration affects the stiction that holds the glass in place causing the vessel to slide gracefully towards the lower edge of the platform.

No, there isn’t a plane anywhere near.

Finally, my wife and I have successfully moved ourselves and our dogs from the middle of France to the north of England - well, not exactly the absolute middle or the absolute north, but near enough. We have left a house that was too big for us and sat on an acre of land that needed a lot of maintaining (nearly two hours on a ride-on mower), and moved into a smaller home with a back garden that only takes about twenty minutes to cut with a small electric mower. Finally, six weeks after leaving France and three weeks after moving in here, we have broadband again.  So, without further ado, here's the full, complete KK224.

Kreative Kue 223 asked for submissions based on this photograph: 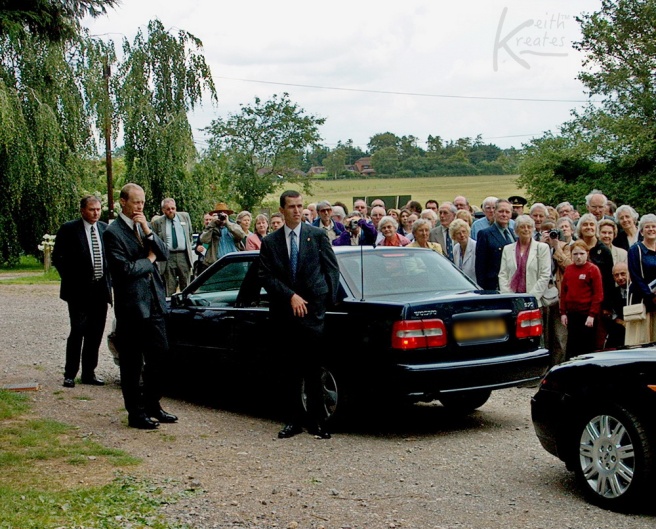 “So when do you think she’ll be here?”

“I thought she would have been here by now.”

“Could it be we missed her?”

“How is that possible? All these people have been waiting, and they would have seen her.”

“Did you ask anyone.”

“Heavens no. I’m embarrassed enough as it is without making a scene. Besides. Look at them. They are all looking down the driveway.”

“Maybe there is another arrival they are looking to see.”

“Please. This is the only thing going on here today.”

“Well, I think it couldn’t hurt to ask.”

“Enough. Do I need any more humiliation?”

“Suit yourself. One last question.”

“Please get whatever it is off your chest. Ask away.”

“Do you recognize any of these folks?”

“Do you have the invitation?”

“What is the name and address of the church?”

“This is silly. I know where the church is. We had a rehearsal here last week.”

“Yes. All Saints Chape—Yikes. This is the wrong church. What. . . I put the address in the GPS system.”

“Does the invitation give a time of the service.”

“Three minutes to go ten miles. Better reprogram the GPS and start moving. You may not live this one down.”

“And admit you went to the wrong church? You might want to hit a tree on the way over there. Maybe it’s your only out.”

This week, from The Dark Netizen, a very short tale.

“School Reunions Are More Fun, When Your Classmate’s A Don…”

Peer Minza, who blogs at peerzadihome.wordpress.com, said: “I am sending a little poem inspired by the photo”. Here it is:

In a crowd, I wait alone without a clue
Life tinged with sadness, no hope, no hue
Dreaming in the shades of mystique blue
Eyes can’t believe but heart says it’s true
It’s destined our special moment is due
In that moment, even time stops with you
I’m counting on that rendezvous; are you too??

I don’t know why I still do this job. It’s certainly not what I signed up for – at least, not what I believed I’d signed up for. Okay, I get the dark suit, white shirt, neat haircut and all that garbage, but that’s not enough, is it?

Have I ever been asked to run beside the car as it goes through the city streets? I have not. Not that I’d want to for a Volvo. Roller, Bentley, Daimler, maybe even a big Jag. But a Volvo?

Another thing. Have I ever been asked whether I’d take a bullet for whoever it is I’m supposed to be looking after? I have not. Mind you, perhaps that’s as well. I’m not sure I could honestly say I would. It’s not as though I’m guarding senior royals or even senior politicians. In fairness, though, which of that lot – the politicians, not the royals, is actually worth risking your life for? It’s not as if any of them would even risk their job for the likes of you and me who put them there and pay them, is it?

No. I’m guarding what is laughingly called a celebrity. Usually, it’s a singer who can hardly get a note out without electronics, or someone who plays a game, like football or even, these days, bloody computer games. Things we all did as kids for fun, now they get stupid money and fame for doing it.

Of course, I’m bitter. I could have done something like that; we all could. It’s just being in the right place at the right time and probably having a big enough sob story to tell. Trouble is, most of us can’t do that, can we? Most of us lead ordinary lives; no major bad stuff and no major good stuff, either. Ordinary. Not that there’s anything wrong with ordinary. Without masses of ordinary people, there’d be no celebrities, would there? Who’d buy their stuff?

And how many of these people get honours and knighthoods, basically for doing tolerably well the job they’re being grossly overpaid to do in the first place.

No, this isn’t the job I expected it to be; nothing like.

And, while we’re at it, how come I don’t get a wiggly wire thing in my ear and a cufflink I can talk to?