Kreative Kue 230 asked for submissions based on this photograph: 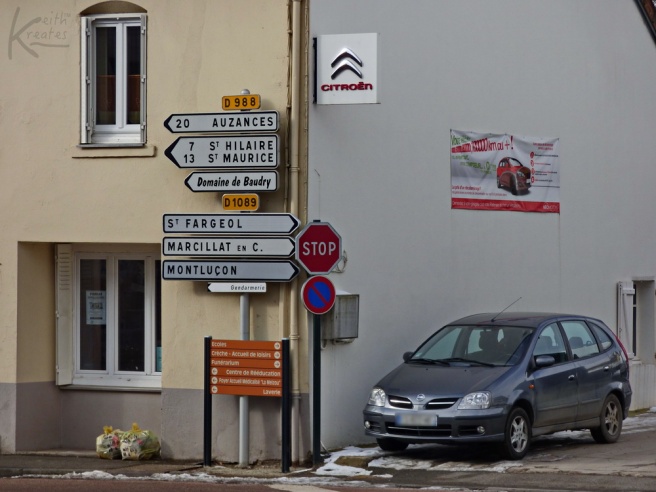 “The one at the Citroën dealer.”

“The Citroën dealer? Why there?”

“When you ordered your Uber you said you were at the car dealer.”

“That is true. I guess I forgot to mention which dealer.”

“Excuse me? You said, car dealer. That’s all you needed to say.”

“At the Ford dealer.”

“You must be an American.”

“A car is a Citroën. You should have said you were at the Ford dealer.”

“You are French right?”

“Zut Alors. Of course, I’m French. You are in France in case you have misplaced your mind.”

“I guess I should call for another ride.”

“You can do that, but there is a small problem.”

“I’m the only Uber driver this side of Auzances.”

“Well, then good luck to you.”

“Non.” You will be pleased to know an American drives in Auzances.”

“Bon chance. You will need it.”

“He drives a Citroën.”

Tien Skye, who blogs at From the Widow Seat offered this tale. I hope you enjoy it as much as I did.

The pugnacious man on the electronic scooter. Everyone in the neighbourhood knows him. Or of him. Zipping around the neighbourhood, he terrorises the pedestrians with his erratic and high speed driving, as well as frantic honking and shouting.

One is never be sure if he will be weaving in and out at high speeds from the back and almost knock into anyone as one is stepping out from the bus stop to flag down the bus. This has happened a few times, to the point everyone believes there is an alarm system on his electronic scooter which reminds him to zip past people from the back as they step out from the bus stop or get off the bus into the bus stop. Even more alarming, he will turn back to flip a bird or scream an obscene or both as he ignores what is in front of him and proceeds to narrowly mow down other pedestrians.

Once, an elderly woman was getting up from a bench in the park after feeding the pigeons when he flew past her on the electronic scooter, startling her so much she plonked right back on the bench, clutching her pounding heart. “Fuck you, you dying hag,” he screamed as he extended a middle finger toward her.

Then there was another time, a child was waiting for his dog to finish doing its business so he could pick up after his pet. Hardly had the child picked up the turd and turned around to throw the little bag into the bin on the pavement did the same man zipped past the child, scaring him so much he fell down and smeared the dog turd over himself. “Fuck off, you little piece of shit!” he shouted.

Today, a father is putting out the rubbish for the garbage collector. Again, the same man zips down the pavement, honking frantically. But the father fails to notice and steps back after depositing the bags of rubbish. The man swerves to avoid him and turns back to give him the middle finger.

“Fuc-” the man never has the chance to complete his swearing as he turns the corner, colliding into a car parked on the side of the road. There is a weird crackling sound from the man as he falls and rolls onto the road, his electronic scooter falling on him.

He groans but does not move. “Help…help me…I can’t move,” he whimpers. “Somebody…help…me…”

The father looks at the man and his electronic scooter. Then he shrugs, turns on his heel and goes back into his flat when he hears the phone ringing. On the other side of the road, the old lady who is sitting on the bench and craning her neck to see what has happened, turns back and continues feeding the pigeons; she hears nothing but the coos of the pigeons. Further up ahead the pavement, the child who is waiting as his dog is marking a fire hydrant, see the man rolling onto the road; but he starts chasing after his dog when it runs off to investigate a bush, hearing nothing but the barking of his dog. At the bus stop, a bus pulls in and passengers get on and off; they hear nothing but the electronic beeps of bus fare and the chugging of bus engine.

Life continues in the neighbourhood but not for the electronic scooter rider.

*evil grins at this story*

But these irresponsible riders, weaving around on their silent electronic scooters at  30kph, sometimes 40kph even, on the pavement, there is no telling what is going to happen at times.

So please, if you are one of the riders, have the decency to slow down instead of just zipping silent past pedestrians.

“Shh! They’re looking for me. They’ll never find me here. ”

“Lower down. I know it’s a ‘no stopping’ sign and no, I don’t know why they chose to put it on the same post as a stop sign. Perhaps there was nowhere else to put it, what with all these other signs crowding the area out. But forget about that, just look at the box.”

“You mean it makes a cloak and covers you with it? What good does that do?”

“No, it doesn’t exactly throw a physical cloak on me. Let me try to explain it simply. You know about optical illusions, yeah?”

“Have you heard about an optical allusion?”

“Look. When you want to hide something, if you make it reflect light with a polarisation exactly opposite to what the eyes expect, it becomes invisible when you look straight at it. You can still see it out of the corner of your eye, but as soon as you try to look at it, it disappears. That, my friend, is an optical allusion. ”

“And that’s what this box does, creates a Symmetrically Extended Polarisation field around me.”

“Wait till somebody comes by to pick up those bags of paper. You’ll soon see why I sit next to this SEP generator.”